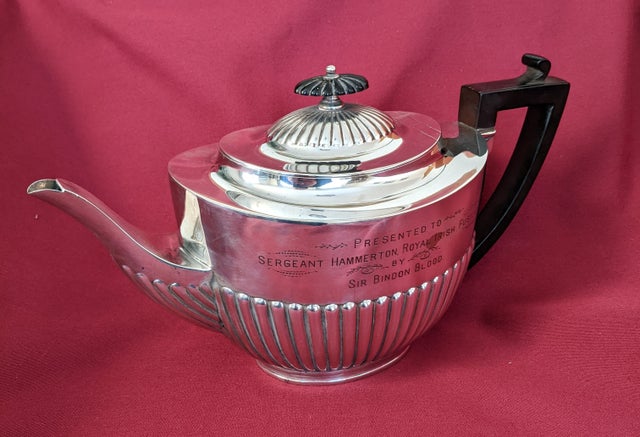 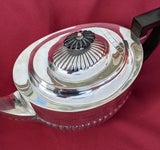 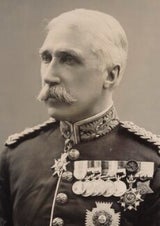 High quality plated teapot, reason for presentation un-known. Small rub to base metal over the words Royal Irish. I have included some details of Henry's military career plus photo of Bindon Blood for reference only. the piece stands 16cmd high and is to the highest quality available at the time.

Henry (Known as Harry) HAMMERTON, late Quartermaster Sergeant, Royal Irish Fusiliers. Born 14th November 1871 and died at the Royal Victoria Hospital, Belfast on the 5th March 1927 aged 55 He lived with his wife Henrietta Eveline Maud at 16, Torrens Street, Belfast. She died in 1960 and was living at 19, Woodlands Croft Road, Holywood, County Down. He is at rest with his wife in Dundonald Cemetery, County Down, Northern Ireland.

Some notes from what remains of his army record.

He joined up on the 4th August 1890 and was posted aged 19 Private 3614, Royal Irish Fusiliers to the Regimental Depot. He was still serving with the 3rd Royal Irish Fusiliers. Militia. His occupation was a labourer and he lived with his parents, Henry Martin and Anne Georgina at Barrack Hill, Armagh, County Armagh, Ireland.

On the 15th September 1902 he re-engaged to complete 21 service at De Aar, Cape Colony.

Fought in France with the British Expeditionary Force in WW.1

He was discharged for the army on the 16th November 1919 aged 48. to his home 4, Barrack Hill, Armagh. Prior to discharged he reverted back to Company Quartermaster Sergeant.

NB; Due to the nature of the piece, extra postal charges will be incurred.