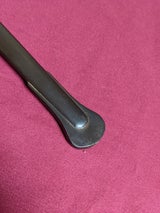 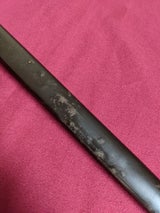 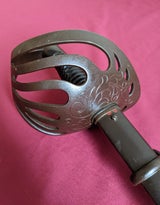 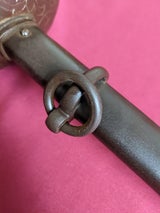 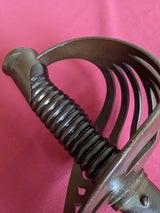 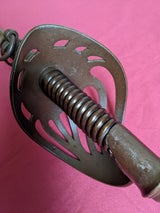 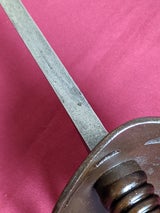 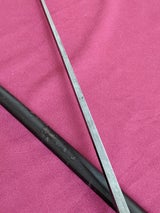 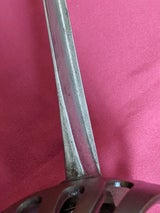 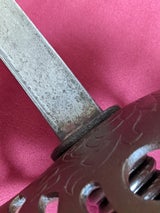 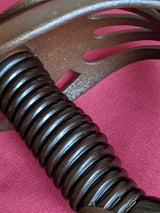 This example, which is so far the only one of its type seen, retains its original, matt brown patination, and is almost certainly a trials or experimental model, as there are no maker's marks anywhere on it or its scabbard.

Blade length to the buffer pad is 85cm. Back edge width (at buffer pad) is 14mm.

Dull finish appears to be original.

An experienced Dutch antiques dealer who examined images of it some years ago suggested that it was a "Dutch “lange sabel No4”(long sabre) model 1895 made for riding artillery. According to the book the hilt should be Berlin zilver (sic), yours looks like iron…"

As no other examples with the overall matt finish have appeared thus far, it is very unlikely that this ever went into production as an official model.

It would appear that perhaps the French were the first to experiment with the thin T-bar thrusting blade, although they did not proceed to adopt it.

The Dutch were interested enough to adopt the style of blade for at least some of their mounted units during the 1890s, resulting in the Model 1895 and including officially approved variations.

This particular model, rare as it is, does feature in Volume II (Tome Second) of Michel Pétard's excellent 1999 work “Des Sabres et Des Épées” - pages 126 and 127.

A perusal of "Swords of the British Army" (Robson) seems to indicate that the British, somewhat later on, did look into the T-bar design - page 58 shows a close-up of a "Sword, Cavalry, Experimental Pattern 1904".

Robson comments on pages 56 and 57 on the 18th Hussars less than satisfactory clash, at sword point, with mounted Boers - essentially the same problem faced by lancers: if you don't kill or incapacitate your opponent with the thrust at the charge how are you going to regain the initiative or get out of the encounter alive?

Given the very slim nature of this sword's blade it is possible that the French considered it insufficiently robust for operational use as a sword – hence the adoption of more traditional, wider body blades for the French-made Brazil export models (though the French did adopt the T-bar format for bayonets)

French cavalry officer and fencing instructor, author of a number of works (between 1867 and 1906) concerning both sword and bayonet fighting.

NB: Due to the Nature of this item, additional postal costs will be incurred.