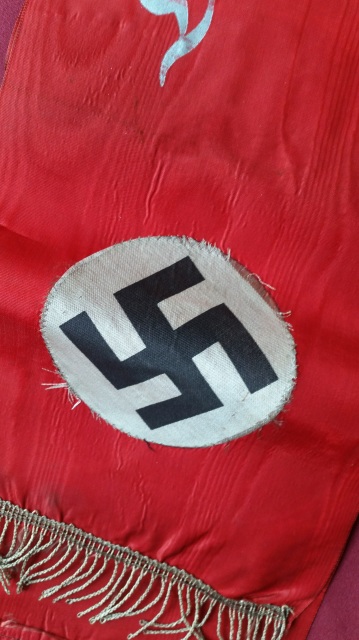 SKU: 1556
£239.95
£239.95
Unavailable
per item
Rare Funeral Sash of Karl Schönherr.
Karl Schönherr (24 February 1867 - 15 March 1943) was an Austrian writer of Austrian Heimat themes. Schönherr was born in Axams, near Innsbruck (Austria), to Joseph and Marie Suitner Schönherr. He began studying philosophy in Innsbruck, then switched to medicine in Vienna, becoming a doctor in 1896. He worked in a hospital in St. Polten before opening his own practice in Vienna. He gave up practicing after the success of Der Bildschnitzer.
He experienced the poor living conditions of the people around him, especially during WWI, and wrote about these topics. Schönherr's works include protests against the Catholic church. He was also in favour of the Anschluss, but apparently did not share antisemitic tendencies.
The sash was produced in red satin and was presented by a poetry circle. The piece has two swastika roundels applied to each end of the banner and measures 300cm by 67cm wide.
1 available
Add to Cart
Proudly powered by Weebly