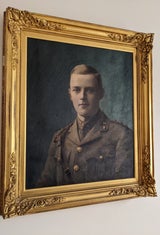 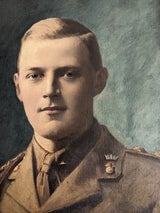 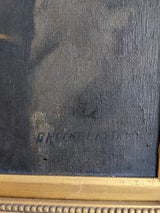 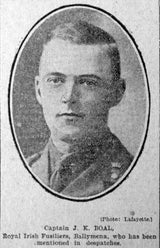 Captain John Kirk Boal 1st Royal Irish Fusiliers was KIA on May 3rd, 1917 at Roeux, France. Captain Boal was only 20 years of age when he died in France. The painting was commissioned by John & Sophie Boal, Johns Father and mother of Antrim House Antrim. The couple were involved in the linen business in Ireland during the early part of the 20th century.

During the 1930s and 1940s he was celebrated as a portraitist, painting society figures such as Marlene Dietrich and the Duchess of Windsor,

from 1915 to 1919 Brockhurst and his wife Anaïs lived in Ireland, where they were friendly with the artist Augustus John and his circle. This ties in nicely with the commission of the piece. The piece is well executed by Brockhurst and has been stored for many years. We have detected one pin hole on the canvas.

PLEASE CONTACT US IF YOU REQUIRE ANY ADDITIONAL INFORMATION.